Tales of the Land: A Metaphorical Topography is a wall installation in the pre-security lobby. The artwork takes travelers across the state of Arkansas by following a stylized Arkansas River. The half cuboctahedron forms represent the Ozarks, Ouachita and Boston Mountains to the north and west of the state, shifting from the flat farmlands in south and east Arkansas and to the Mississippi River. Some of the paintings and intricately hand-cut sculptures illustrate natural elements from the Arkansas landscape. Others share imagery and patterns honoring the broad cultural heritage of the state. 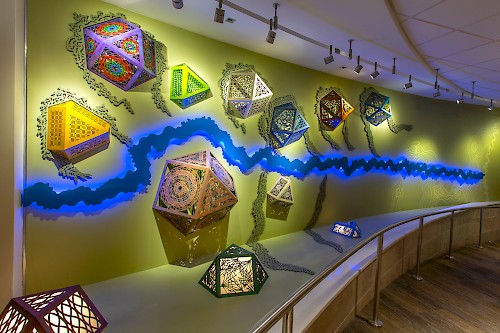 • A Marshallese weaving, representing the state’s newest immigrants from the Marshall Islands.

• Fish scales, representing the state’s waterways and fishing as a past-time and natural resource.

• Abstracted tornadoes, representing the fierce weather patterns of the region.

• A prolate spheroid pattern, representing the sport of football and Razorback fans

• A pattern made of the delicate needles of the Loblolly pine, Arkansas’s state tree.

Learn more about artist June Sekiguchi's vision for this artwork

Click here to view the next piece of art featured in our program.